skip to main | skip to sidebar

So what do you do when you are home all day?

So what did I do all day? I cleaned places that hadn't been cleaned for a while. I worked on Jason's quilt. Laundry, dishes, vaccum,ironing, read you name it I probably did it. If anyone really knows me, they know that I get side track really easy.

I will start cleaning the kitchen then go put something away in the office only to stop at the computer to check blogs, email, etc. Then notice some papers needing to be filed in the cabinet downstairs. Once those are put away. I remember the clothes need to be taken out of the dryer. I put them in a basket then start another load of clothes. I then fold towels and put them away only to see how bad the toilet and floor is in the one bathroom. I go into the kitchen to get some cleaning things when I realized I have not finished loading the dishwasher. I finish that and start wiping up the counters when I notice all the dirty dish towels and rags and then head downstairs where I notice stuff on the TV that needs to be put away.

Anyway you are getting the idea. By the end of the day I look around and realize I did accomplish alot and wish for 4 more days like that. It is just nice to have one of those productive days.
Posted by LIFE IS GOOD! at 8:21 PM 4 comments:

Have you ever read something and then you try to figure out where you had read it and can't find it? This last week I read something very profound on Red Shirt Friday. I thought it was an email that someone had sent me. But I couldn't find it. I finally decided it was in some magazine I read while I was at Red Mountain Spa. I can't even remember exactly what it said but I remember how I felt.

Clint and Lia sent Scott and I red shirts with I support our troops on it for Christmas. I didn't think much of it and thought maybe it was some promotion think they had going. It has layed nicely folded in my closet the last two months until this last Friday when I wore it for the first time proudly. I attempted to take a self portrait after 24 tries, this is the best I could do. 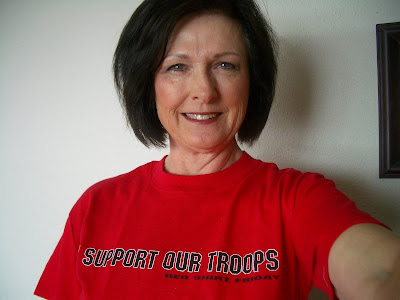 I copied this off the internet of the explanation for Red Shirt Friday.

Red Shirt Friday is a symbol of unity of support for our solders who have given their lives and their freedoms so we might enjoy ours.

It is for the loved ones that have sacrificed and continue to sacrifice for our benefit. Mothers, wives, brothers, sisters, children, and relatives.

It is for the friends neighbors, communities, organizations, states and our nation that suffer from our loss.

It is for all of the ones that are serving now and have served. 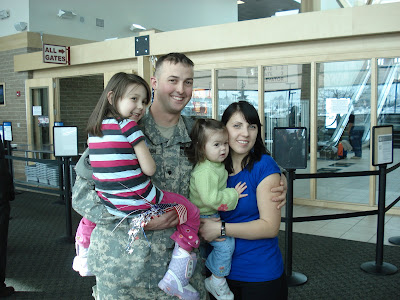 Here is my son Clint and beautiful wife and daughters Nadia and Bianca last year when Clint had a two week leave from Iraq.

I am proud of my son for all that he does in protecting our country. He returned from a 15 month deployment in Iraq last November. I can't even imagine everything he has been through serving in Iraq. I know he had a friend killed, he has been shot at and had to shoot at others. Right now he is working hard on being promoted to an NCO. He has passed his board of review and working on getting enough points through correspondence classes to receive this promotion.

He has struggled with a lot of things in his life. His mother being one of them. When I had my accident as soon as he found out he called me from Germany to see how I was doing and express his love for me. I have watched him in the last several years over come a lot of things and have seen the growth in him getting out of his comfort zone and trying to do what is right.

So to Clint I love you and Thank you for the sacrifice of defending our country and being who you are.
Posted by LIFE IS GOOD! at 11:40 PM 3 comments: